Excuse me, but your slip is showing! 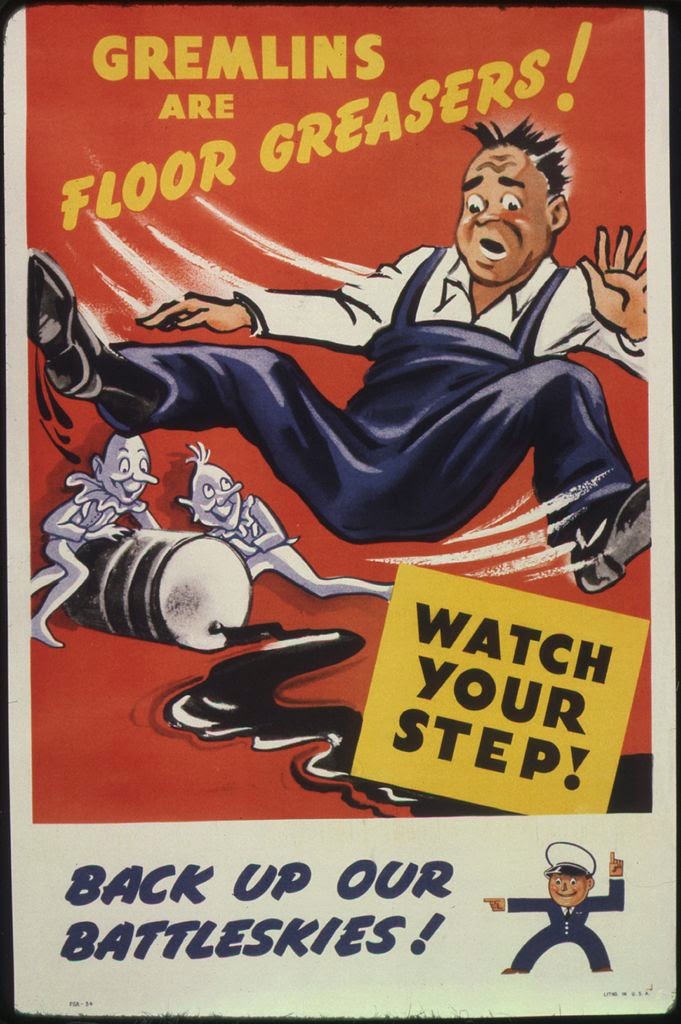 I don't know how this issue has escaped me for nearly forty years, but I'm not alone. In that time, I have occasionally talked about coefficient of friction for floors, but I just discovered there has been no widely accepted standard for slip resistance. Not only that, but neither the IBC nor ADA define slip resistance, even though both require slip resistant floors and walkways.

How the heck is that possible? Think of all the very specific requirements in the building code. How did they miss this one? And think of ADA, with its Byzantine combination of Spock-like precision in some areas, and a "Take a guess and we'll see you in court" approach to other requirements. How can it be that the good folks who write the ADA requirements know exactly what so many dimensions must be, but they have no idea what they mean by slip-resistant? It seems to me that not falling on your arse is a lot more important than a quarter inch difference in the location of a water closet, but this apparently - no, this obviously important performance characteristic has had no definition.
The IBC, in 1003.4, requires that "Walking surfaces of the means of egress shall have a slip-resistant surface and be securely attached" but does not define what slip resistance is. Apparently, the IBC doesn't care about floors not in an egress path.


Accessible surfaces must be slip resistant ... However, the standards do not specify a minimum level of slip resistance … because a consensus method for rating slip resistance remains elusive. While different measurement devices and protocols have been developed … a widely accepted method has not emerged. Compliance with the standards requires specifying surface materials, textures, or finishes that prevent or minimize slipperiness under the conditions likely to be found on the surface. Standard practices for minimizing floor or ground slipperiness will likely satisfy compliance with the standards … [my emphasis].

Makes you feel all warm and fuzzy, doesn't it?

It's not that there are no standards related to slip resistance. We have:
Surely, with all those standards - and there are many more! - determining what slip-resistance means should be easy. Well, not quite. As noted, some of the standards have been withdrawn, and, with a couple of exceptions, most are test methods or discussions of slip resistance only that do not set minimum standards.

To make things more interesting, there is strong disagreement about the validity of various test methods and equipment. For example, the Ceramic Tile Institute of America (CTIOA) objects to the use of ASTM C1028, claiming it is "widely recognized as being inappropriate for assessing pedestrian safety" and that it "can give 'safe' ratings to very slippery materials." CTIOA and others argue that ASTM C1028, which measures static coefficient of friction, has little to do with real-world slip resistance. Furthermore, the ASTM C1028 test method is limited to the laboratory, which makes it useless for testing in-place conditions.

Some of the standards specify a coefficient of friction, but do not indicate if it is for wet or dry conditions, or do not specify the test method. Given the different materials and methods used for testing, those standards mean nothing. An additional complication is inherent in the nature of the products: we walk on them, so normal wear reduces their slip resistance. Unless there is a maintenance program to replace flooring as the coefficient of friction changes, does it make sense to specify a property that may be valid only for a couple of years?

Another contentious issue is the test condition; most tests are done dry. Even if a test is performed under wet conditions, there is little agreement about what those conditions should be. How wet is wet? Should the tests be performed with deionized water? Or with a soap solution? What about oil? Or, for that matter, banana peels?

The test methods themselves present more variables; the flooring itself is only one of the materials used in a test. Many of the older tests use leather, presumably because that was a common material for shoe soles. Being a natural material, leather is not consistent from one sample to the next. Today, many shoes use something other than leather for soles, and it's likely that the coefficients of friction vary from one material to another. It is clear that no single test will be applicable in all situations, or that it will accurately replicate even one real-world condition.

One of the more recent standards is ANSI B101, which is unique in its extent. Much more than a test method, it includes a discussion of slip-and-fall dynamics and factors that affect slip resistance of all walkway surfaces. It sets three traction levels: High, with a static coefficient of friction (SCOF) greater than 0.6, Moderate, at 0.40 to 0.60, and Low, at less than 0.40.

It doesn't look like this issue will be resolved anytime soon. Perhaps it's just too slippery.
Posted by Sheldon - Tuesday, April 29, 2014