Where do bad specifications come from? 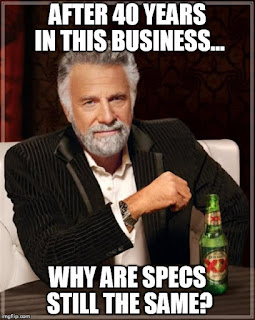 It's approaching ten years since I wrote "The Making of a Curmudgeon." In it, I reminisced about my decision to run for Institute Director and thinking, "Holy cow, when my term is done I'll be almost sixty!" Well, sixty came and went, and I recently celebrated my twentieth anniversary at my office.

Milestones like that tend to make one look back, to think about what has happened, to think about what might have been. During my thirty years as a specifier, I thought things would improve, that specifications would get better, that relations within the construction team would become more collaborative and trusting, that drawing details would gradually lose the pesky problems that lead to problems in construction, and that, eventually, the construction process would be a thing of wonder, with few difficulties. I thought that when it came time to retire, I could look back on continual progress and leave knowing that the world was a better place, due at least in some part to what I had done.