How did we get here? Effects of the economy on membership, MythBusters edition 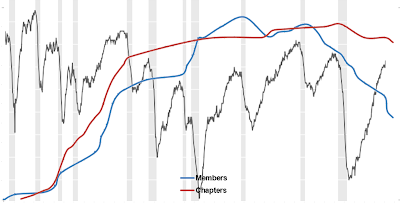 Among the things that have been blamed for declining membership is the economy. By the time I was elected to the Institute board, membership had already fallen about fifteen percent from its peak in the late '90s, and it continued to decline. As we'll see in a moment, my term of service on the board happened to coincide roughly with the Great Recession of 2007-2009. Membership did decline during that recession, though not as much as you might think. It's more significant that in the years leading up to that recession, the economy was good, yet membership was declining.

When I was on the board, and many times since, I have heard members attribute the loss of members to the economy. While I accept that as a possibility, it seems to me that if the economy does have an impact on membership, we should regain lost members when the economy improves. I didn't think that was happening, so I decided to do look at the numbers. Please note that I am not an economic or financial analyst of any sort, but what I found does seem reasonable. And what did I find? That the economy has had little impact on CSI membership.