How did we get here? Chapters 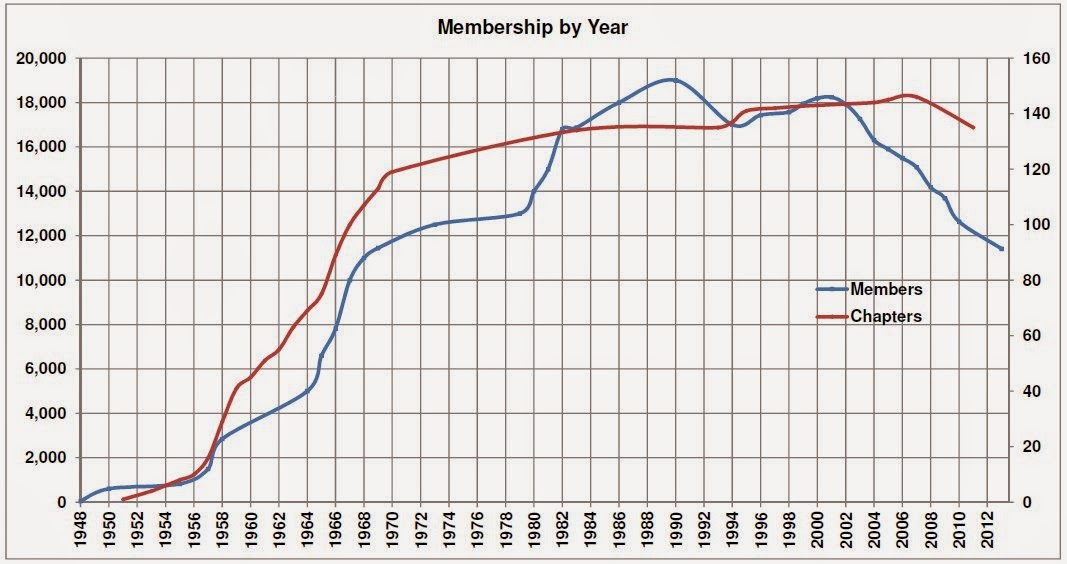 In the last post, "How did we get here? Membership", we looked at a graph showing CSI's membership curve. I'm using the same graph this time, with a second curve to show the number of chapters. As was the case last month, it was hard to find accurate information, but the overall curve is close to what it would be if I did have all of the correct dates. For sources, I used charter dates that were given to the Bylaws Amendment Review Task Team, responses to an inquiry I sent to all chapters, Walter Damuck's history of the Institute, and 50th anniversary notices that appeared in various CSI publications. Along the way, eleven chapters were lost, a few by merger, and others because they fell below the minimum number of members required to keep their charters.

As noted in the last post, I relied on reports or other confirmed information to plot the membership curve. I also said that I remembered hearing that membership peaked at near 19,000, but had no verification. Even so, a few members were concerned that I didn't report that number, so I added it. Assuming the number is correct, it shows a drop of about 1,000 members from 1989 to 1995, followed by a recovery of about half that amount by 2001. What happened? The graphs I've looked at don't appear to indicate an economic upturn that would have supported a growth in membership. 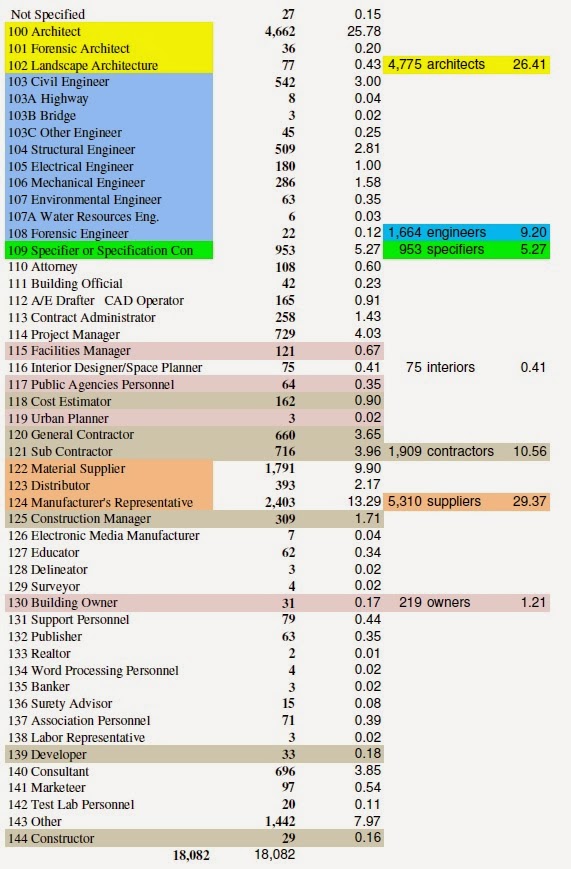 One of the questions asked on the LinkedIn discussion was, "How have things changed?" I won't attempt to answer that question, but here is an analysis I made in 2001. The way I summarized groups may appear somewhat arbitrary, but without firm rules to guide members in completing the membership application, the information cannot be precise. When I joined CSI, I was an architect, working for the first time as a specifier, for the University of Minnesota. I had invested a lot of time in getting my license, so I checked "Architect" rather than "Specifier or Specifications Consultant" or "Owner". There were, and still are, many such options.

I'll leave it to my gentle readers to get the current membership data and summarize what has changed. Send your analysis to me, and I'll post it in a future post, with accreditation, of course!

(Click on the images in these posts, and a larger version will appear.)