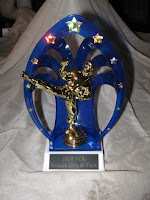 Each year, most organizations set aside one day to acknowledge the efforts of their members, and to honor those who have made significant contributions. CSI is no exception; we have award ceremonies at chapter, region, and Institute levels. The crowning moments take place at the annual convention, where Institute awards are presented, where we honor those selected for Distinguished Membership, and where we honor those who have been elevated to Fellowship. While the criteria for most awards are fairly straightforward and easy to understand, there is a mystique surrounding Fellowship; but more on that later.

I suspect many members don’t give these affairs much thought, unless they are nominees, but it's worth taking a few moments to consider what awards and honors signify. To be meaningful, an award must be earned, and it must represent something important.

Contributions must be acknowledged

Acknowledgement of effort and contribution is always important, perhaps more so in a volunteer organization. In the business world, success and achievement are rewarded by increased salary, bonuses, and other perquisites; the commonly accepted, though often inaccurate, measure of one’s value is the paycheck. The more important you are perceived to be, the more you make. Honors and recognition may be important in business, but rarely do they take precedence over money.

In the world of professional organizations, there may be an occasional cash reward, but in most cases, outstanding work is recognized by an award or honor, often accompanied by a plaque or other object of little intrinsic value, presented at a ceremony attended by the recipient’s peers.

The value of any award depends on a number of things: the requirements that must be met, the uniqueness of the award, the total number of awards presented, the importance of the organization making the award, and so on. Even though a plaque in itself isn't worth much, what it represents can mean a great deal to the recipient, the organization, or a larger community.

There is no doubt that we must recognize effort and contributions, but for that recognition to have meaning, differentiation is necessary. If awards are to have value, they must reflect the degree of effort they represent. Is sitting at a registration table equivalent to creating a new education program? Is merely holding an office and voting at board meetings equivalent to demonstrating leadership while in the same office? All of these things deserve recognition, but that recognition should reflect the effort involved. The logical result is a hierarchy of awards, ranging from a simple "Thank you!" to honors that are intended to acknowledge achievements that are "above and beyond."

Work of short duration should be acknowledged immediately. A simple “thank you” often is enough, but that is the absolute minimum required. Most people don’t expect a plaque for doing small jobs, but they do expect and deserve an expression of thanks. An oral expression of thanks at a chapter meeting is appropriate for the people at the registration table, and certainly for those who organized the current chapter meeting. Some will consider it an anachronism, but I believe a short written thank-you remains appropriate, and may have even more impact in today's world of tweeting and texting.

Formal letters of acknowledgement, on the organization letterhead, should be used for more significant contributions. A copy should be sent to the recipient’s employer, especially if the work recognized is related to the recipient’s job. This will tell the employer that the employee is respected in the construction industry, and will promote CSI at the same time.

Finally, for the most important awards at each level, plaques or other gifts that can be displayed are appropriate. Using such gifts for all levels of awards reduces their value, and, because volunteers usually keep volunteering and receive more than one award, recipients must decide which ones to display.

I suspect all people enjoy having some visible manifestation of awards, but after receiving a few, they may not have a place for them. I have seen offices with walls full of plaques, but not many; most people choose their favorite few for display and store the rest, eventually throwing them away. Awards committees should look for alternatives to plaques; useful gifts with the organization logo will be appreciated. Shirts, hard hats, hats, key chains, coasters, Matchbox toys, tape measures, levels, business card holders, and other gifts may be more welcome than plaques.

Awards committees are in an awkward position. Understandably, they want to present awards; unfortunately, at least from what I have seen, nominations are rare. Without voluntary suggestions, committees have little choice but to solicit nominations. While there is nothing wrong with that, it's important to not present awards just for the sake of presenting awards. Many people do work that goes unrecognized, but it's entirely possible that no one in a given group did anything worthy of note!

Presenting too many awards reduces their value, and the more important the award or honor, the greater the devaluation. I once saw a chapter newsletter with the banner headline, "104 awards presented!" We aren't first-graders; we should understand that if everyone gets a trophy, those trophies mean nothing. I recall a tale about a local police chief, who, after making a presentation, was given the usual plaque. His sotto voce comment: "Just what I need; another sh***y plaque." Of course, the value of such a plaque may depend on how many a person has received, something the awards committee should consider.

Think of it this way: The more awards there are of a given type, the less the value of that award - and the higher the award, the greater the impact.

Next, in "Above and beyond", let's look at CSI's highest honors: Distinguished Membership, Honorary Membership, and Fellowship.
Posted by Sheldon - Tuesday, August 20, 2013