And then there are dimensions… 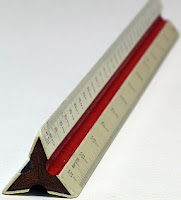 In the last article, "Absolute nonsense", I wrote about the great number of words available to express fine distinctions of meaning, and how, properly used, they can be quite precise. In daily use, however, words often are used incorrectly, and most would agree that many disagreements are based on different interpretations of what we say.

In contrast, we usually think of numbers as being exact. After all, it's easy to look at a set of drawings and determine the exact number of doors, or windows, or any other object. Dimensions, however, cannot be precise, even though they are stated as if they were.

Anyone who has done construction of any type, from building a house down to replacing a deck board, knows that dimensions are not absolute. A tape measure may have marks denoting thirty-seconds of an inch, but it seems the length you're measuring never falls exactly on one of the marks. If you look closely, you'll see the marks themselves have width, so where does the exact measurement occur? In the center of the mark, or on one side? You'll also notice that tape measures that do show thirty-seconds of an inch show them only in the first few inches. After that, the old expression "close enough" seems to rule.

It is possible to specify an exact dimension, but in practice, it's impossible to meet that specification. All things are manufactured to nominal dimensions, and all measurements are nominal. In most cases, today's tolerances are good enough that we don't need to worry about them. One problem arises when the individual tolerances of several things are added together. For example, if two panels are required to align within a sixteenth of an inch, the difference between adjacent panels won't be noticeable. Using only that tolerance, however, could result in the first and last of sixteen panels being an inch out of line. That's why we often see a series of tolerances, e.g., 1/4 inch in 10 feet, 3/8 inch in 20 feet, and 1/2 inch in 40 feet.

It's frustrating when manufacturers' specifications don't indicate tolerances. If an aluminum extrusion is shown as 1/8 inch thick, what does that mean? Is it 1/8 inch minimum, or 1/8 inch plus or minus? If the latter, how much is the plus or minus? If the manufacturer refers to a dimension as nominal, does that mean it's within the limits established by a standard, or does it mean the dimension will be whatever it happens to be? Many times, tolerances are established by industry standards. That's great, but you have to know that what the standards are, and you have to know that the manufacturer complies with them.

It looks like metrication won't happen soon in the US, if ever. Until then, we sometimes are required to state two dimensions, one in United States customary units, the other in metric. Conversion factors make it relatively easy to change from one system to the other, but stating both if only one will be used introduces another opportunity for error.

Stating numbers in both systems makes no sense at all when talking about rounded numbers. Does the statement, "The 10,000 square meter (107,639.1 square feet) building…" really mean the building was exactly 10,000 square meters? It's possible, but I doubt it. When using rounded numbers, units of both systems should be rounded. In this example, the area in square feet should be rounded to 107,000, or even 100,000.

One of the problems with customary units is their origin. The foot was based on - surprise! - the length of a human foot; the inch on the width of a thumb; a yard on the distance from nose to end of a thumb; the mile on 1,000 (mille) paces of two steps. Even if everyone had identical body measurements, those units of measure didn't work as a system, so the numbers were fudged over time until a foot had twelve inches, a yard had three feet, a mile had 5,280 feet, and so on. There was no reference standard until about 1845, when the British government created a bronze yardstick, marked in feet and inches. Of course, even then it was known that the master yardstick would vary in length with the temperature, but it was, as we say, close enough.

Meanwhile, about 1795, the French created the metric system. Instead of being based on body parts, it originally was defined as 1/10,000,000 of the distance from the North Pole to the equator along a specific meridian. Although more rational than other systems of measurement, it had its own problems, not the least of which was that it was just a bit difficult to measure. In addition, the earth is not a perfect sphere. Regardless, a physical standard meter stick was, for most purposes, close enough (sound familiar?).

As scientists began measuring ever larger and ever smaller objects, the metric system was found wanting. The current definition of a meter was stated in 1983 as "the length of the path travelled by light in vacuum during a time interval of 1/299,792,458 of a second." Which leads to the question, "How long is a second?" The answer, defined in 1967, is "the duration of 9,192,631,770 periods of the radiation corresponding to the transition between the two hyperfine levels of the ground state of the caesium 133 atom."

The two points of this little side trip are that what passes as absolute measurement is, for all practical purposes, impractical, and that for building construction, "close enough" is a useful term.

In defense of measurements based on fractions rather than decimals, it is easier to find a quarter, an eighth, or a sixteenth of a given length than it is to find a tenth; simply keep dividing in half until you get where you're going! Measuring a tenth or hundredth of that same length requires an estimation that by nature is imprecise.

If dimensions aren't precise, what good are they?

Drawing dimensions always have been an expression of an ideal, stated as if they were exact, ignoring the reality of measurement, fabrication, and tolerances; they remain so today, despite the continuing improvements in theoretical precision.

Software modeling now makes it possible to produce very accurate measurements that are at once impressive and meaningless. Fortunately, software has the ability to round off numbers, so drawing dimensions appear in practical terms, such as 30-1/4, rather than 30.24837906 inches.

No matter how precise the model or calculation, printing often introduces distortion, sometimes greater in one direction than another. Further distortions can be introduced by expansion or contraction of the paper due to humidity and, to a lesser extent, temperature. Together, these problems necessitate the "do not scale" warning found on most drawings. In practice, scaling is accurate enough for most measurements, because waste factors, often ten percent, are more significant than errors resulting from scaling.

Much of construction does not require extreme precision. Partition framing and thickness, opening locations, curves, and other elements can be off quite a bit before an error becomes significant. Smart design incorporates tolerances to minimize the problem; anyone who has had to tear out a wall because the width of a corridor was a quarter of an inch less than required by ADA won't dimension exactly to ADA requirements again!

Isn't it odd that words have precise meanings, while numbers are approximations?
Posted by Sheldon - Friday, July 26, 2013