The making of a convention 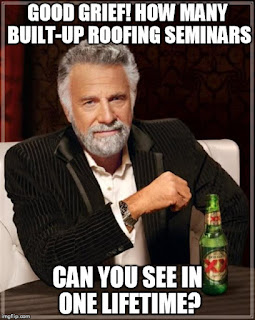 A lot goes into a convention: location, scheduling, publicity, solicitation of exhibitors, invitations to potential attendees, and more. Although the exhibit floor is extremely important to exhibitor and attendee alike, the educational seminars and activities are equally important.

Those activities take many forms. The traditional lecture format continues to be popular, but interactive presentations have been increasing. Panel discussions, which seem to be either dreadful or very interesting, allow audience participation. In the last few years, we have had presentations and live demonstrations on the exhibit floor. On occasion, these involve one of my favorite activities - getting your hands dirty. Another recent addition has been YP Day (young professionals day), a collection of special events aimed at young professionals and others new to the construction industry.

I've always known that choosing presentations and speakers must be difficult, and this year I learned how true that is. In December of last year, I was asked to serve on the CONSTRUCT 2017 Education Advisory Council, the group that helped selected this year's speakers and presentations. The Council was led by Jennifer Hughes, Informa Education Manager. In the past, I had made suggestions about presentations, so I felt obligated to accept the challenge.

We started by reviewing a list of about ten possible tours. Even though I love tours, especially of production facilities, I have arrived at convention early enough to go on one only a couple of times. The calls for speakers were still coming in, so we didn't start on those for a while.

As you're probably aware, CSI and other organizations typically send out calls for presentations shortly after the previous year's event. In the past, I wondered why they started so far in advance, but there are three good reasons. First, there's a lot more to the selection process than you might realize, and it takes a lot of time. Then, there is human nature; it seems that no matter how much time is allowed, most people wait until the last minute to submit. Finally, advertising and schedules for the next convention begin to appear months before the event. With registration set to open in May, we had to complete our work by the end of February.

The original deadline for proposals for CONSTRUCT 2017 was 9 January; at the time, I was disappointed to learn that only thirty-four had been submitted. With that few, the rest of the process would have been easy, as we would have had to use all of them. After the deadline was extended by one week, we received a list of nearly two hundred proposals - and then the fun began.

Jennifer asked us to review and score the proposals early in February. The spreadsheet she sent had two tabs. The first included information about the proposals, including title, description, speakers, learning objectives, estimated "grade level" (100, 200, 300), primary audience, and secondary audience. It also indicated which speakers had submitted multiple proposals. The second tab contained information about the speakers, including bios and speaking experience.

Evaluating presentations is not an easy task. The titles sometimes are misleading, the descriptions sent by the presenters can be confusing, and the most important parts - the speakers' abilities and the actual content - remain unknowns to those who haven't heard the speakers. Many of the council members had heard a few of the presenters, so we took their observations into account. Another factor is length of the presentation. Most of them were set at 60 minutes, but some were given 75 or 90 minutes, the intent being to give more time to those speakers who are covering complex subjects.

Some topics were the subject of many speakers, so we had to decide who would do the best job. Credentials are useful information, but they don't apply to presentation style or ability to make the subject interesting. On the other hand, having multiple presentations about a given subject is good for attendees, who often have to choose between two or more topics they want to learn about.

After initial comments had been submitted, we went through a series of scheduling options, which included changes in titles, descriptions, and times. Given the number of options and the amount of information, each iteration took a lot of time. But we did it! In the end, the scheduled events were: 41 seminars, 2 tours, 22 presentations on the show floor, the YPD events, a keynote speaker, and the "game changer" speaker.

One of my standard comments about convention presentations is, "How many built-up roofing seminars can you see in one lifetime?" I heard similar comments during the convention; "I heard that two years ago", "I talked about that ten years ago!", and so on. While repetition might seem a problem to the veteran, though, we always have new people who need the same basic information. We'll always have 100 level presentations.

One of the most difficult things to evaluate is the grade level of a presentation you haven't heard. The description might sound like it's for those with more experience, but too often the comments are "That was a waste of time." When you consider the experience that most specifiers have, it's not surprising to hear those comments.

The spreadsheet was so large it couldn't be printed. I displayed it on two 24-inch monitors but still had to do a lot of scrolling, and I used a third monitor for other files and for looking up speakers online.

"Interactive PowerPoint" is not the same as an interactive presentation.

One of the first things I did after joining the group was contact Paul Doherty, and I encouraged having him as the keynote speaker. I have skipped many general sessions because the keynote speakers too often are motivational speakers who may be entertaining but have little to say. However, I did attend and enjoy Thom Mayne's presentation. I'm not a big fan of celebrity architects, but his firm's involvement in design goes beyond making pretty pictures; they apparently get into the details and material properties. I don't care for their results, but the process is interesting, and I hope it inspires other architects to care more about how their buildings work.

Thanks to Jennifer for assembling and managing the Advisory Council, and for her dedication to the educational part of the convention. If you have comments about this year's programs, or suggestions for future topics, I encourage you to send them to both Jennifer at Jennifer.hughes@informa.com, and to CSI staff at memberservices@csinet.org. And as always, I invite you to post your comments below.
Posted by Sheldon - Tuesday, September 26, 2017