Time for some fun!

Each summer, boards of directors make plans for the next year, education and certification committees begin preparing study courses, newsletter editors start bugging chapter presidents for articles, and planning committees search for good technical programs and tours. All of these are serious, necessary things that must be done to provide the services members expect.

But as they say, all work and no play can make things dull and boring. Chapters, usually through region conferences, show other chapters what their committees are doing and discuss best practices. I wonder, how often do we show each other what we do to have fun? In the next couple of articles, I'm going to recount stories from North Central Region conferences; I invite you to respond with your own tales of mirth and merriment.

The first event took place at the 2003 North Central Region Conference, which was held in Duluth, Minnesota. This was a special occasion, because Gary Betts, a member of the Chicago Chapter and the North Central Region, had just been elected as Institute president. Some years before, when Robert L. McManus, another NCR member, had been elected as Institute president, he was honored by a somewhat rowdy coronation.

A couple of Minneapolis-St. Paul Chapter members, Alana and John Griffith, I believe, suggested we do something similar for Gary. Not being one to break a long-standing tradition, or to miss a chance for some good-natured fun, I wrote a script for Gary's coronation and prepared a suitably eloquent proclamation.

For nearly three centuries, beginning around AD 800, the Vikings dominated the European scene. From their homelands in Scandinavia, they struck westward, their superb ships carrying them to Britain and Ireland, to the northern and western coasts of mainland Europe, and on across the Atlantic to Iceland, Greenland, and Newfoundland. Other Vikings journeyed eastward, down the great rivers of the Russian interior. They reached America five hundred years before Columbus.

The Viking longboat, the most advanced ship of its time, was a major factor in the success of the Vikings. Built of wood and iron, these boats were fast and able to handle both open seas and inland rivers with ease. Their shallow draft meant that fully loaded boats could be sailed in rivers only three feet deep, and they could be put ashore anywhere there was a beach. (If you haven't seen one, there is a replica in a park here in Duluth.) 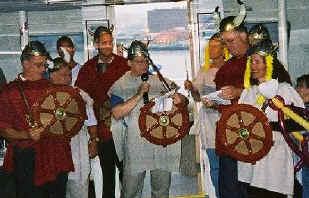 Blonde, burly, and brutal, hungry for loot and land. That is the disgusting stereotypical image of the Viking. Violent they may have been, but they lived in a turbulent age whose values were not ours. Recently, modern scholars have revealed another side of these sturdy folk. Contrary to popular belief, the Vikings were a sensitive, caring people, full of civic virtue, with strong family values, a great interest in birdwatching, a love of delicate pink and yellow flowers, and a fondness for lacy undergarments.

Since those glorious days of yore, the Vikings seem to have vanished. We no longer see their graceful ships or their horned helms, and we no longer hear the ghostly call of their long battle horns. Indeed, the only reminder we have of those great warriors of old are the hapless purple and white dwarves of Minnesota, who annually do battle against the green and gold elves of Wisconsin. 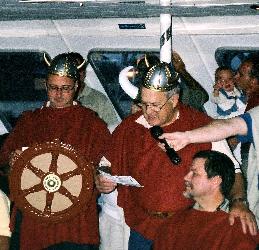 Yet all is not lost! Odin, god of warriors and battle, along with his son Thor, god of thunder, and Frey, the god of fertility, colorful things, and interior design have conspired to restore the glory of the Vikings and to reclaim the Middle Kingdom.

Years ago, in their infinite wisdom, they saw promise in one young man, who might one day be fit to rule. Chivalrous and wise though he was, a series of tests was planned to prove his mettle. Year after year he was called upon to serve in many ways. Each task was a challenge: some would test his strength, some would test his wit, and all would test his patience. In the end, he passed each trial. 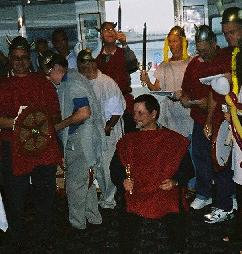 Tonight, the not quite so young man who was chosen, and who has survived his trial by fire, faces the last test of his worth - the Will of the People. I call to your attention a man whose actions are known to all, a man truly fit to wear the crown. Let the Lords and Ladies of the Court bring forth Gary, Lord Betts the Terrible, Master of the North Central Kingdom!

For the rest of the story, see the Form and Order of Service for The Coronation of His Highness Gary, Lord Betts the Terrible