How did we get here? The good old days 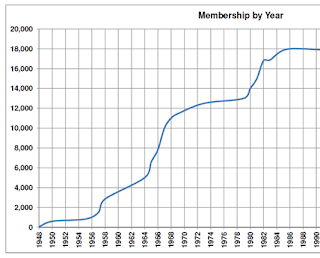 One of the things that has plagued CSI for some time is a lack of a tangible something of value.
For a very long time, CSI offered useful things of real value. The first part of our membership curve suggests CSI must have had something that brought in new members and led to the creation of new chapters. Let's see if we can discover what that something was.

While reading several historical documents, I found nothing that said "We did this and gained 200 members!" but I found a few things that contributed to CSI's growth. Yes, there were a few membership drives, but it's important to understand that a membership drive with nothing to offer probably will be unsuccessful. If you have nothing to offer, what difference does it make if you can get it at half price?

To understand what made CSI grow, we must look at what it was about construction documents that encouraged the formation of CSI. We could search for documents from that time and analyze them, or we could use the original goals of the organization as an indicator of what was wrong with construction documents. Consider this list of the five priorities, and what they suggest - if these things were not problems, there would have been no reason fixing them would have been a goal!
Other objectives included: providing a forum for exchange of information among architects, engineers, contractors, building maintenance engineers, educators, and others involved in construction; improving quality, clarity, and technical validity of specifications; developing a greater appreciation of the value of specifications; getting architecture and engineering schools to develop courses for preparing specifications;

The architects who started CSI recognized the chaotic state of construction documents and banded together to bring order to them. How did they do that? What did they do that enticed others to join them?

In 1948, CSI had members but no chapters. Even though the bylaws allowed the formation of chapters, with a minimum of ten members, it took a few years before chapters appeared. In 1960, an article titled "Chapters Not Begun" was published in the Construction Specifier. It listed ten states that had ten or more members, then encouraged those members to start local chapters. The Metro New York Chapter, with thirty-nine members, was the first, followed by DC and Chicago chapters in 1952, and Los Angeles in 1953.

I believe the founding of chapters was a big step in the initial growth of the organization. It's one thing to know that others share common interests, quite another to meet with them, share information, discuss problems, and work toward the elimination of those problems. Remember, at that time communication was limited to written letters and phone calls. The chapter meeting became an important member benefit and made it easy to show non-members why they should join. Membership drives during these early days were quite successful. In 1956, 300 new members joined in six months, and a membership in 1957 brought in nearly 1,000 members, along with seven new chapters. Clearly, CSI had something to offer, as can be seen on the membership curve.

As noted, what we would call "networking" today was an important part of membership, but what else did CSI offer? The Construction Specifier, first published the year after CSI was incorporated, had to play a big part, with technical articles leading the way. 1950 saw the introduction of "Specification Clinic", and it was common for the magazine to discuss how to write better specifications. Carl J. Ebert, the editor from 1949 through 1963, understood what members needed to know and successfully filled the magazine with needed information. The usefulness of the Specifier was made evident in 1956 when 800 copies were taken by architects at that year's annual AIA convention.

The early '60s saw the addition of activities and programs that made CSI more attractive and continued to draw more members. Committee work began in earnest, giving more members opportunities to contribute to technical documents. The specifications competition was promoted in the Specifier, and region conferences brought members together from larger areas. More technical documents were included in the Specifier as "pink sheets" and chapters began technical research.

Two major publications finally addressed many of the problems known to specifiers and manufacturers. A series of pink sheets titled "A Manual of Practice for Specification Writing Methods" led to the formation of a committee that would develop and publish the CSI Manual of Practice. During the same period, the 20-page "CSI Format for Building Specifications" was published in the Specifier, and the original 16 Divisions of MasterFormat were introduced. The Spec-Data program, started as a joint venture with the Producers' Council, presented a standard method of presenting information, a great boon to specifiers and manufacturers alike.

Together, all of these things brought great value to CSI members. There were things to do, problems to solve, and face meetings were the way to get things done. By 1969, with the introduction of SectionFormat, most of CSI's important contributions to the industry were completed, and the membership curve flattened for the next decade.

The next growth spurt occurred from 1980 through 1996. CSI continued to develop its documents, MasterFormat became the accepted standard for organization of all types of construction information, the five-digit numbering system was a great improvement over the limited four-digit system, Uniform Location of Subject Matter was published, and in 1978, the CCS certification program was introduced, followed by the CDT, the CCPR, and the CCCA.