Are specifiers an endangered species? 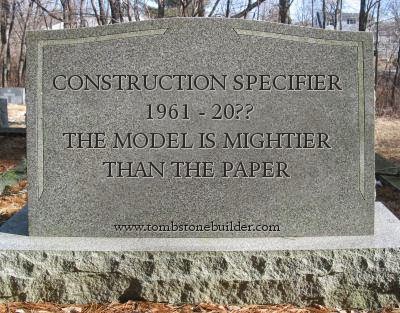 For many years, there have been debates about the future of construction specifiers. Where will we find new specifiers? Are they all dying off? Is the profession no longer needed? While I believe there is reason for concern, I don't think much has changed.

Several years ago, Bob Johnson conducted an informal survey on 4specs.com, asking members to answer these questions:
After sixty-nine responses, Bob made his final report, indicating the average age, with the range in parentheses:
Bob opined that 'lack of young specifiers in today's world is not a new story and that most people do not become specifiers until they have been around the "professional block" a few times and discovered where their talents lie and what part of the profession they are most interested in.'

I wish the survey had included at least one more question: What is the size of your firm? The lack of engineers is not surprising, but it would be interesting to know how they would respond to the same questions.

As noted, if you ask specifiers, many will say they are a dying breed, but they've been saying that for some time. Given the small number of firms that use specifiers, that may appear to be the case, but there simply aren't very many specifiers, and never have been, so it's hard to say if their numbers are decreasing.

This group has always had more gray hair than average, for a couple of reasons: No one went to architecture school with the intent of becoming a specifier, and people typically don't become specifiers until they've had at least a few years' experience.

The move to information modeling may impact specifiers, but it will be primarily in how they do their work. Before the advent of word processing software, some specifiers also were typists, though many relied on redlining, with an administrative person doing the typing. As word processing became more common, specifiers did more of their own typing, until it became the norm, and all specifiers now are more or less required to be more or less proficient at word processing. An unfortunate result of this is that many architects today see specifiers as little more than glorified typists, and their real value - research, knowledge of materials, understanding of constructability, and coordination of drawings and specifications - is overlooked.

Must specifiers change with the times? Of course, as much as any other profession. And, just like any other profession, there are specifiers who are content to do things the way they have done them for years, even if that no longer makes sense. The recent move toward building modeling may well have an effect on specifiers; as the grunt work of the job fades away, they will be able to spend more time doing the important part of their work. Specifiers recently have been talking about changing the name of the profession to something like information manager, partly, I believe, to dissociate themselves from the common perception of what specifiers do.

The growth of specifying software, such as SpecLink, may also have an effect. Much as CAD was seen, 30 years ago, as a program that would reduce the need for architects by simplifying drafting and eliminating the need to be able to think in three dimensions, many architects expect specifying software to simplify specifying, perhaps to the point that specifiers no longer will be needed.

As BIM and specifying software develop, and we leave behind our paper-centric view of construction documents as drawings and specifications, more than the job of the specifier will change; the format of specifications and the way they're used also will change. As the software becomes more intelligent, it is almost certain that we will need fewer architects and specifiers to do the same amount of work. But as long as schools fail to teach the very things that led states to require architects to be licensed, large projects will require specifiers, regardless of what they're called.

Specifiers may be evolving, but they're not going away.
Posted by Sheldon - Monday, April 13, 2015