How did we get here? Membership

In the LinkedIn CSI Leaders group, Joy Davis recently began a series of discussions under the heading #CSIStats. The goal, as expressed in the first post of the series, is "helping CSI leaders understand where CSI stands by sharing facts about the Institute … to help you start and  participate in discussions about who CSI is and where the Institute should go in the future." 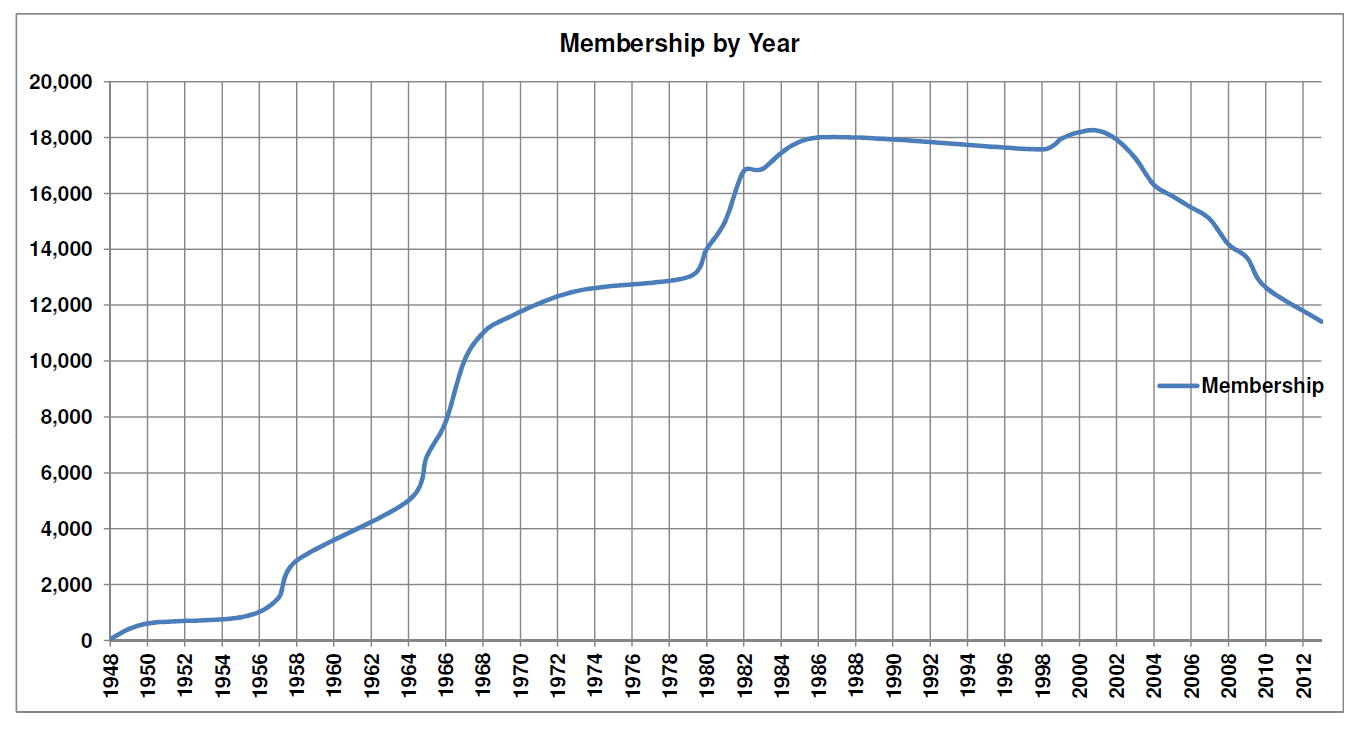 Each discussion has started with a few membership statistics about who members are and what they do, followed by links for recommended reading, and a question to start a discussion.

As often happens, each discussion has had a brief flurry of responses, then died. Part of the problem, which affects everything we do, is the limited number of participants. Because this is a locked LinkedIn group, discussion necessarily is limited to members of the group, who number 503. Still, these are by definition leaders of CSI, so it's not a bad place to have a discussion, though it would be good to seek input from the general membership. That is being done through the Institute website, where the posts are available to all. To date, they have garnered a total of three comments. (Contrary to popular belief, posting something to a website does little to get the word out, as few people visit websites except when looking for specific information.)

In Week 4 I posted a few statistics about the discussion.
To be fair, it's unusual for emerging professional members to be in leadership roles (though I'm sure they would be admitted to this group if they asked), so their lack of participation here is not surprising. However, similar statistics are found in other LinkedIn groups, in 4specs discussions, and elsewhere. In essence, it's a problem that plagues us in all areas: we spend a lot of time preaching to the choir.

We advertise for members in our own publications, and we ignore the many potential members who are engineers. We claim to be an organization that represents all who are involved in construction, yet ignore two of the most important groups: owners and contractors. We do a good job telling our members about coming events, but rarely go outside to invite non-members to our meetings. We tell each other about awards members have received, but make no effort to tell others what our members have done or why the awards are important. And we talk a lot about getting younger people involved, but it seems we spend our time talking about them, not with them.

In the next few posts, I'm going to add some context to our discussions. The membership statistics that have been presented on LinkedIn are interesting, but by themselves it's hard to know what they mean. How are we doing compared to other organizations? It's obvious that we're suffering, but is that unique? Are other organizations facing the same problems? I'm not saying it's o.k. to have trouble recruiting new members because everyone else has the same problem, but it would help to know if what we're experiencing is a result of what we do or don't do, or if it's a result of societal changes.

By now, I'm sure most members are aware that our membership is declining, but I doubt that more than a few know how our membership has changed over the years. The graph shows our membership curve, from our beginning in 1948 to the present.

I'm not indicating specific numbers for a couple of reasons. For most years, I relied on anecdotal reports I found in narrative histories written by various members, and those numbers didn't always agree. For the period 1999 through 2007, I used figures obtained from reports I received while serving on the Institute board. There are many years before 1999 for which I have no information, but adding those numbers would not materially affect the curve. I recall seeing claims that our membership was near 19,000 several years ago, but I was unable to find confirmation, so I left the curve as you see it, topping out at just over 18,000.

It has been suggested that part of the reason for the falling membership after 2000 has been the economy, and indeed, we have had some bad times since then. However, during the first forty years, we went through eight recessions, in 1949, 1953, 1958, 1960, 1969, 1973, and 1980. Despite those slowdowns, membership grew. The graph indicates the economy probably had some effect, but the trend was always up.

Since 1988, we have had more recessions. As might be expected, they had an adverse effect on membership, but subsequent recoveries had no restorative effect. And now, even during an improving economy, the trend continues down.

The question, then, is this: What is different now? Why did membership grow the first forty years, despite economic conditions, and why is it not now responding to an improving business climate? It's easy to blame the economy, but I don't think that argument holds up.
Posted by Sheldon - Tuesday, January 21, 2014