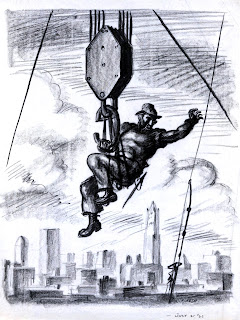 "Existing communication methods have done a good job of addressing most of the information exchange involved in construction. E-mail and electronic file transfer are commonly used between owner and architect, and between architect and consultants. One conspicuous oversight has been the contact between the design professional’s office and the contractor in the field.

"Several computer programs are now available to dramatically improve the exchange of information between office and field. This type of program is so powerful and compelling that it may well be considered the "killer app" for construction administration, just as CAD became a killer app for producing working drawings."


The above quotation is from introductory paragraphs to "Killer Apps!", an article that appeared in the February 1999 issue of the Construction Specifier
, and in the December 1999 issue of Doors and Hardware Magazine.

If you read the article, you will see that much of what was needed to greatly improve communication between the office and the field was in place at that time: file sharing, collaborative markup of documents, remote viewing of the project site, and audio communication. So what went wrong? Why no killer app?

Looking back, it's clear that many obstacles prevented realization of the potential of the new technology. We're so accustomed to relatively high bandwidth now that what we had fifteen years ago seems primitive. In 1999, 56K modems were still quite common, and 1.5M download wasn't readily available for a few more years. While today's Internet access is generally good, back then it tended to be a bit spotty. Two years after" Killer Apps!" was published, the Minneapolis-St. Paul Chapter attempted an online chapter meeting, with Rob Dean (BSD), Ted Smith (ARCOM), Colin Gilboy (4specs.com), and Bob Johnson (then at RTKL), as presenters. The results, chronicled in "Murphy's Law strikes a Webconference!", demonstrated just about every problem there was with communication by Internet.

Computers were a lot slower then, too. Intel Pentium microprocessors were beginning to approach megahertz speed, a far cry from the multi-gigahertz chips we have today. Cost was another issue, and lack of imagination may have played a part.

The software discussed in "Killer App!" provided all the necessary features, but it was klutzy, and it took time to set up. And, although it was possible to set up a webcam to make remote viewing possible, it was inconvenient. The scenario described in the article, which had someone in the field trying to explain a problem to an architect back at the office could have happened, yet little has been done until recently.

Smart phones and tablets now make possible the personal, very portable computer that existed only in science fiction novels only a few years ago. No more brick-sized phones or suitcase sized computers! We're finally beginning to see computers on the construction site, but not as much as I would expect, and many of the possibilities remain unexplored.

The obvious use of a smart phone is to take a picture of a problem and send it back to the office. That allows the person in the office to see in real time what's going on, to ask for different views, and to talk about the problem. E-mail and messaging supplement the process, and some file sharing is possible.

The tablet, with its larger screen, makes it much easier to view documents, and to see larger images. On the other hand, it's awkward to use as a camera, and it won't fit in a jacket pocket. A useful accessory would be a small, wireless camera that could be used more effectively, and also could be inserted into spaces too small for the tablet.

Both smart phones and tablets have one glaring problem - the glare and reflection that makes it difficult to see the screens in daylight. Looking ahead, something like the Google Glass will make communicating from the field even more convenient and efficient. Wearing such a device, the operator will have both hands free, allowing it to be used while climbing a ladder or crawling through openings, or even while driving. The integral GPS in all of these devices will show exactly where a picture is taken, or where to find anything that's in the model.

Communication isn't always from field to office, though. The person in the field can send photos or videos back to the office, and get drawings or other documents back. At some point, we'll have either a small projector or a tablet with an integral projector, which could be used to project images onto a wall or floor, making it easier to lay out work and locate various items.

Crane operators will have tablets mounted in their cabs to receive information from the business end of the crane, and installers will use them to get project-specific information from the manufacturers. And anyone can be called into a conference at any time, with all parties seeing what's going on, and having access to all related documents.

Another thing that we'll see is independent of the device: linked documents. For example, clicking on a detail flag on a drawing will take you to that detail. Or clicking a revision note will take you to a document that explains the revision. Or clicking a material designator will call up the related specification section. That can be done now, but it will become automatic.

You don't have to wait to start making better use of your smart phones and tablets. A number of companies offer apps that can make your life in the field easier. Here are a few to get you started:

Read about jobsite implementation of tablets in "Huge construction firm uses iPads and AppleTV to save millions."