The Price of Gold

One of my CSI hats is History of Fellows Chair for CSI's College of Fellows. As such, I search for background to create or update the biographies that are on the Fellows' website, at www.FCSInet.org. This often is a difficult task even with new Fellows, who either can't find the time or are too bashful to write their own biographies. Getting information grows more difficult as time goes on, and becomes a real challenge for those Fellows who are no longer with us.

While my search generally moves along at a pace dictated by work at office and at home, some events, such as each year's elevation of new Fellows, notable achievements of a current Fellow, or the passing of a Fellow, inspire greater effort. One such incident occurred in February of this year, when Joy Davis notified me that a collection of three CSI medals - for President, Past President, and Fellow - were being auctioned off on e-Bay.

Putting on my Sherlock Holmes hat, I tried to deduce who the medals had belonged to. The ad indicated that all of the medals were from 1985 or earlier, so I started with the list of past presidents. An obvious first step was to delete those whose presidency or Fellowship came after 1985; I then eliminated those who were not Fellows (there are a few), and, assuming that a living member would not sell those medals, limited my search to those Fellows who had passed away.

The result was a short list of twenty-two names. I was able to determine from the ad that the seller was in Missouri, but it wouldn’t necessarily follow that the original owner also was from Missouri, so I set that aside for the moment. However, because the advertised collection of medals did not include an Honorary Member's medal, I made a fatal mistake, and eliminated Honorary Members from the list, which was reduced to seven names.

I sent an e-mail to the seller, asking whose medals they were, and was told that they belonged to Robert Vansant. (Vansant was an Honorary Member, but for some unknown reason, that medal was not included in the collection offered for sale.) The seller's response was especially interesting to me, as Robert Vansant is one of the names I remembered from my early days as an architect. He wrote a monthly article titled “Vansant’s Law” in A/E Concepts in Wood Design, which was always interesting and educational. As I recall, each month's article discussed a limited subject and how it was presented in specifications or drawings.

Robert Vansant is an example of one meaning of FCSI - “future continued service to the Institute.” He didn’t hang it up after becoming a Fellow, but went on to serve as Institute President, and wrote many articles to help others better understand legal concepts related to construction. In addition to A/E Concepts in Wood Design, his articles also appeared in the Construction Specifier, Consulting Engineer, the AWPA Reporter, and Water and Wastes Engineering.

An engineer and attorney at Black & Veatch in Kansas City, Vansant was a charter member of the Kansas City Chapter, which was formed in 1959. He became a Fellow of the Institute in 1970, served as president in 1973-74, received CSI President's Plaques in 1971 and 1972, and was made an Honorary Member in 1986, the year after his death.

Robert Vansant and Glen Ablanalp were instrumental in establishing the Engineers Joint Contract Documents Committee (EJCDC). Vansant also worked with the American Water Works Association, and served as chair of the AWWA Standards Council, and he received the National Society of Professional Engineers' PEPP Award in 1987.

Meanwhile, back at the auction, we saw a sudden flurry of bidding as the deadline approached. As it turned out, one of the bidders was our own Dennis J. Hall, who had seen the medals on e-Bay and didn't want them to be lost to CSI, but he said he had bid as much as he was going to, and dropped out of the bidding. Bob Kenworthy submitted the final bid just before the deadline, winning the auction. Afterward, he contacted the seller to ask about the missing Honorary Member's medal; alas, it seems to have disappeared. Bob mounted the rescued medals in a display case, which was exhibited at the CSI booth in Philadelphia. The medals have since been donated to the Institute, and will soon be on display at CSI's main office, in Alexandria, Virginia. 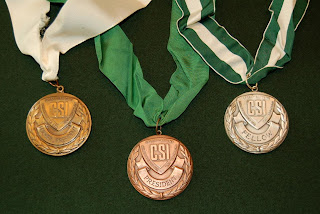 One of the many interesting things about this treasure hunt was learning what metals are used for CSI medals. What are those metals? Silver for Fellows, copper for presidents, bronze for former presidents, and gold for distinguished or honorary members. However, as former Institute president Gilman Hu said, "A medal awarded to you is only worth the honor that goes with it. A medal purchased isn't worth the metal it was made from."
Posted by Sheldon - Friday, October 22, 2010